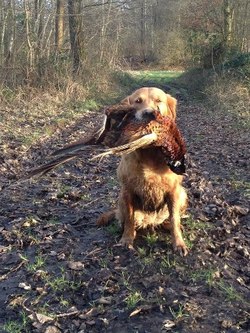 WORKING TESTS
Old Rosie had three wins in puppy/special puppy tests, a second and a C of M.
In novice she had a first, second, third and two forths;
and in open a second, two thirds, a forth and two C of M's.
THE GOLDEN RETRIEVER CLUB INTERCLUB .
2009 she ran in Scotland for Wales as a novice dog
2011  she ran in Ireland for Eastern Counties as a novice dog
2012 she ran in Yorkshire for Wales as an open dog. ( handled by a friend of hers and mine ) as I was running her daughter
Powered by